Thanks to all who attended the event at Whetstone Community Center, Saturday, November 7th, 2015

Shuai Chiao Classes for Credit You can study the oldest style of Chinese Kungfu at OSU as a Human Sciences course.

The Shuai Chiao Kungfu Demo Team relaxes with wall-sits after their performance.

At the 2005 GLKF tournament
Willie was a silver medalist.

Congratulations to our Club members, and thanks to assisting black belts, Mr. Trepanier and Ms. Lake.

Video:  Mark stays in close for a surprising counter at the 2015 GLKF.

Thanks to our master presenters, and all who attended this historic event!
Over 60 people participated, and the Shuai Chiao Kungfu Club had seven members there.
For more information: http://pushHands.club

The Central Ohio Push Hands group
will have their 2:00pm, Saturday the 28th, practice at Comfest. Meet at the north end of Goodale Park, just west of the big pond.

All OSU Kungfu Club members and the general public are welcome to attend and participate in Taiji push hand practice!

World Tai Chi / Qigong Day
Was on Saturday, April 26th
http://www.worldtaichiday.org
Thanks to all who joined us at Goodale Park in Columbus, Ohio to celebrate this world-wide event!

The OSU Kungfu Club demonstrated some traditional training forms
along with Tai Chi, practical applications, and a sparring demonstration.


Club Vice-President Michelle at the Fair.

St. Clair College gymnasium in Windsor, Ontario, Canada (just south of Detroit).
Entry: $50, only $25 per person for teams of four or more!
(This allows for shuai-chiao and any other divisions: forms, weapons forms, other sparring, in which you would like to engage).
For more information contact:
Sifu Jay McCoy
Wu Shen Shuai-Chiao Kung Fu Academy
temujin18@hotmail.c

The Shuai Chiao Kungfu Team, with coach Grigsby.  Our team made it to the semifinals.

The Shuai Chiao Kungfu and Buckeye Tang-Soo-Do teams pair up in the early matches.
Many thanks to our Kungfu Club members, and to all the teams who came out to support this event.
All entry fees went to the Kick-It group fighting Childhood Cancer: www.facebook.com/KickItOSU
Martial Arts Friendship Day

Congratulations on a successful test to Fa and Marya, 2nd Chieh, and Emil and Mark, 3rd Chieh.
And, thanks to local Shuai Chiao Black Belt Tamera Lake for helping to test our students. OSU Leadership Collaborative Event

Wednesday Night, July 24th -- Mirror Lake, 9:30pm
This special event was to greet some eighty freshmen in the special leadership group.  Along with school spirit
sing-alongs, over 300 members of different campus groups were on hand to greet the new students.
TCAAT at San Jose State University

Our small Demo Team (Michelle, Sifu Mike, and Tach) put on a
solid demonstration of Shuai Chiao forms and techniques for this special event at
the Ohio Union Performance Hall, April 7th, 2013.
Congratulations to the USA Team at the Yixing Shuaijiao
2013 International Invitational Tournament 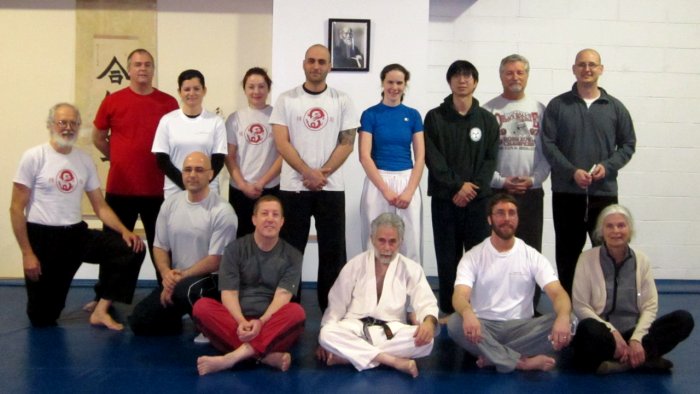 Friendship Seminar at Aikido of Columbus, February 17th, 2013                              Photo by Robert McNitt
Our general theme was, "Fear".  Martial arts instructors of Aikido, Taekwondo, Shorin-ryu Karate,
Tai-chi, Ba-qua Zhang, and Shuai Chiao Kungfu presented observations and methods from their styles.
The location was: Aikido of Columbus, 3003 Silver Dr, Columbus, (614) 263-1111
Thanks to all students and instructors who made this a special and successful event. Congratulations to the USA Team for a good showing
overall at this international tournament, and especially:
Matt Gelfand - First Place, 90Kg Brandon Dahl - Second Place, 67Kg

This special international training camp was hosted by the Shuai Chiao Kungfu Club at OSU, and run by the
United States Shuaichiao Association: our national organization.
The Camp was presented by Dr. Chi-hsiu Weng, the founder of the OSU Shuai Chiao Kungfu Club, and his son, Jan-yu Weng, who is the current President of the USSA.  Shuai Chiao competitors from as far as California and New York attended this special event.

Thanks to all the Martial Arts Sport Clubs at OSU, and Rec Sports Staff, who made this a successful event.

Thursday Night, May 31st, 2012
Congratulations to those who advanced in rank, and thanks to local Shuai Chiao Black Belts; Ms. Tamera Lake,
Mr. Jerry Sheldon, and Mr. Raymond Trepanier, who were on the testing committee.
2012 Central Ohio Asian Festival

The OSU Kungfu Club performed Shuai Chiao demonstrations both Saturday morning
and Sunday afternoon at this year's Central Ohio Asian Festival.
We attend the May 20th, 2012, Sport Club Banquet at the Fawcett Center

World Tai Chi / Qigong Day
Saturday, April 28th
http://www.worldtaichiday.org/
Thanks to all of the local Tai Chi players who came down to Goodale
Park for our WTCQD event.  The clouds parted, and the sun finally came out as we shared our Tai Chi forms with each other.

In their first match, the Fabulous Follicles of Canada's Colin Cooper
prevailed over the Jet Li Homage style of OSU's Fabricio Castellano.

--   REAL KUNG-FU  --
This simple movement could work for you!
Even a little self-defense know-how can make a big difference when you need it.
Come to any Shuai Chiao Kungfu Club workout and see for yourself.

The Kungfu Club joined with the many other Sport Clubs on
December 1st, 2011, to help Rec Sports donate a total of over 1500 toys!
Congratulations to our tested Students!
November 2011 Shuai Chiao Kungfu Club Belt Test

World Tai Chi / Qigong Day
http://www.worldtaichiday.org/
Saturday, April 30th, 2011
Thanks to all who participated in this year's WTCQD event!

Come Celebrate the Year of the White Rabbit Learn Tai Chi and Shuai Chiao Kungfu with us!